Looking Back at... Houses of the Ashland Center Street Historic District

The houses of the Ashland Center Street Historic District reflect the changing tastes in residential architecture taking place in Ohio between the 1840s, when the street was laid out, and the early 1900s, when the major buildings were completed.

The variety of architectural styles found here makes this district exceptional. Within this tree-lined setting, one can see not only examples of Greek Revival, Early Gothic Revival, and Renaissance Revival styles popular between 1820-1860, but also examples of the Queen Anne style, the Stick style, and the Second Empire style, popular between 1860-1890. As well, there are two Georgian Revival homes, a Spanish Mission style house, a Jacobethan Revival house, and a house built in the famous Prairie style of Frank Lloyd Wright, all popular from 1890-1915.

The Center Street Historic District is, in short, a veritable textbook in residential architecture. Finding such a variety of styles within such a lovely contiguous setting is a rare architectural occurrence in Ohio or elsewhere.

Center Street has been the home of farmers, clerks, merchants, bankers, judges, doctors, politicians, and industrialists, of men and women who grew up in a nineteenth century rural setting and together transformed it into the twentieth century community Ashland residents now know. The fabric they wove with their work, their families and friendships is essential to the history of Ashland. The buildings which they built, lived in, and left behind them have both historic and architectural value. Thomas H. Smith, Director of the Ohio Historical Society, announced on June 29, 1976, that the Center Street Historic District in Ashland, Ohio had been entered in the National Register of Historic Places by the National Park Service, United States Department of the Interior. A thank you to former Ashland resident Alta Simms for her tireless dedication of the research needed for this honor and for the information included here.

The Center Street Historic District of Ashland encompasses a four block section in the heart of the city. Placed on the National Register of Historic Places in 1976, this section of town is recognized for the variety of architecture and the local historical importance of the people who built and lived in these homes. This article briefly reviews several of the outstanding residences found within the district and all are located on Center Street.

S. H. Grabill House at 413: Samuel H. Grabill, son of a German immigrant, was raised on a farm near Hayesville and all his life wished to be known as a progressive farmer. But when he built this house at 413 Center Street in 1903 he was, as well, a successful businessman. In 1898 he had organized the Star Telephone Company and, prior to that, he had helped to found the Ashland Gas and Electric Light Company. A bright young man from Loudonville, Charles Kettering, worked for him, servicing the first electric street lights of Ashland. This twelve room Georgian Revival house has classical overtones in the two story Ionic columns supporting the portal. The rounded verandas on either side of the entrance, moreover, contribute to the building’s symmetry. The extended carriage entrance on the north side remains as evidence of a turn-of-the-century time when friends of the Grabill family would arrive for parties held in the third floor ballroom.

William V. B. Topping House: William Topping built this house at 421 Center Street in 1908, and in doing so he replaced the small frame house his father, a hardware salesman, had built on the site about 35 years earlier. Although the Topping name in Ashland has for many years been associated with the Ford automobile, William Topping in 1901 became the manufacturer of the Safety Door Hanger, a device used in factories and barns. This tool was invented by J. H. Burkholder of Ashland. This house is remarkable for its solid construction and its colorful quality; its orange tile roof contrasts with both the dark vertical siding and the brick structure of its lower portion. This house is said to have been lavish in its original furnishings, among which were hand-blown Tiffany shades.

Randolph Freer House: Randolph Freer and his family occupied this frame house at 431 Center Street before building in 1873 the brick Renaissance Revival house at 313 Center Street. Randolph Freer and his brother Jonas came to Ashland in 1849 and began their careers as hardware, wool, and later stock and grain dealers. They were so well trusted as merchants that they organized in 1874 the Farmers Bank, a major financial institution in Ashland. This Queen Anne style house is remarkable for its complex design, its unusual central turret, the second story veranda, and the imbricated, or wavy, siding on the upper portion of the house.

Jonas Freer House: This home at 503 Center Street is a pre-Civil War building, beautiful in its symmetry, having a central block with recessed wings design. Its tall central gable gives the building a temple-effect and, with the building’s bilateral symmetry, helps to characterize it as an excellent example of Greek Revival architecture. Just below the gable’s point is a decorative fret. The frontispiece has a hood with consoles. Jonas Freer and his wife Mary lived here during much of the latter part of the nineteenth century. They raised nine orphans. Among them was William Duff, an Ashland writer and historian whose 1915 Ashland Centennial Program and his History of North Central Ohio are invaluable to the student of Ashland’s history. In 1907, upon the wishes of Mary Freer, the Ashland County Children’s Home was established.

The Frank Slocum-John Ferrell House: Originally a farmhouse, this residence at 831 Center Street was built in the late 1860s. Its structure is symmetrical, having a central block and recessed wings. Additionally, it has ornate verandas and a central pointed arch and low roof. The cornice is bracketed and denticulated. In general, the building has an Early Gothic Revival flair. John Ferrell bought this house from Frank Slocum during the late 1880s and continued to farm the adjacent land and cultivate the apple orchard which grew where Ferrell Avenue is now situated.

T. W Miller House: This house, at 934 Center, is one of Ashland’s most magnificent structures. Built in 1914, it exemplifies the Spanish Mission style of architecture. These Mission style characteristics include its smooth stucco surface, arched doorway and windows, rear courtyard, and its palatial drawing room having a vaulted ceiling and galleries. Thomas Miller, born in Summit County in 1875, was the son of a blacksmith and carriage builder. At 16, he took up teaching, then attended college in Akron and became fascinated with Akron’s growing rubber industry. In 1896, he established his own rubber manufacturing company in partnership with several men from Rochester, New York. In 1903, that company built a plant in Ashland; known as the Faultless Rubber Company. The Ashland Hospital Association acquired this house in 1969.

John C. Myers House: Although Frank Lloyd Wright is not authenticated as the architect of this house, the house, built in 1908, displays many characteristics of Wright’s famous Prairie style. It has an irregular, Wrightian composition and that horizontal (Prairie) look which was so innovative during the first decade of this century. This horizontal quality is accentuated by the ribbon windows, dark wood stripping, and the low pitched hip tile roof with broad overhang. The oblong chimneys are also typical of Wright’s style. Urn-like planters which Wright placed on houses which he himself designed as a “signature” of his work are, moreover, visible in a 1915 photograph of the house published in William Duff’s 1915 Ashland Centennial Program. John C. Myers graduated from Harvard in 1902. His business career was in the pump manufacturing business which his father, F. E. Myers, had founded. John C. Myers was, as well, an art collector and, judging by the house he built, indeed a patron of the arts. This house since 1958 has been the home of the Ashland Theological Seminary.

Dr. Jacob Cowan House: This home, built by Dr. J. P. Cowan in 1859, is now home to the Ashland County Historical Society. Dr. Jacob Cowan, a physician and politician came to Ashland in 1859. At that point in time, he had already served two terms as a state legislator. In 1874, he was then elected to the United States Congress, representing the 14th District of Ohio, which included Ashland County. Once a simple brick structure, the home was renovated and enlarged around 1900 by the P. A. Myers family and adapted to the Georgian Revival style of architecture popular at that time. The house is remarkable for the fine detail of the frontispiece which matches that of the roof dormers of both the house and the carriage building. 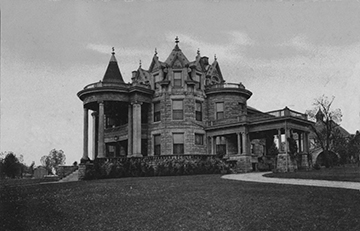